Oxygenated conditions in the aftermath of the Lomagundi-Jatuli Event: The carbon isotope and rare earth element signatures of the Paleoproterozoic Zaonega Formation, Russia 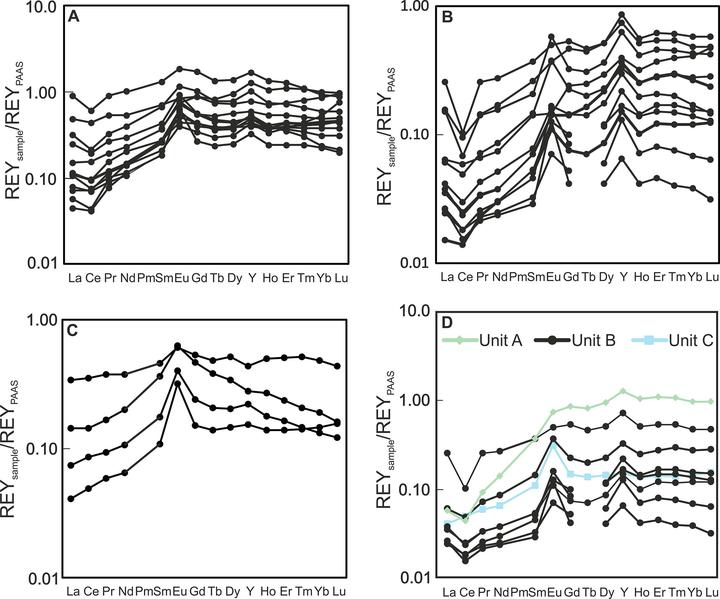 REY$_{SN}$ patterns of Units A, B, C, and samples from all units (D) that passed screening (i.e., Zr < 4 ppm). Unit A has a higher concentration of REY and shows MREE enrichment compared to LREE and HREE. Unit B has a coherent pattern but with varying REY concentration. Unit C is also enriched in MREE compared to other REE and does not show anomalous behaviour other than a positive EuSN anomaly. Samples from Unit A and C have a strong shale contamination and only one sample from each unit passed the screening.

The c. 2.0 Ga Zaonega Formation of the Onega Basin (NW Russia) has been central in efforts to understand what led to the initial rise (Great Oxidation Event, GOE) and postulated fall in free atmospheric oxygen and associated high-amplitude carbon cycle excursions, the Lomagundi-Jatuli Event (LJE) and subsequent Shunga Event during Paleoproterozoic time. The Formation accumulated shortly after the LJE and encompasses both the recovery in the carbon cycle and hypothesised contraction of the oceanic oxidant pool. However, interpreting the correct environmental context recorded by geochemical signatures in the Zaonega rocks is difficult due to a complex depositional and diagenetic history. In order to robustly constrain that history, we undertook a multiproxy study (mineralogy, petrography, carbon isotope and rare earth element composition) of carbonate beds in the upper part of the Zaonega Formation recovered in the 102-m composite section of the OnZap drill-cores. Our findings differentiate primary environmental signatures from secondary overprinting and show that: (i) the best-preserved carbonate beds define an upwards increasing δ13Ccarb trend from c. -5.4‰ to near 0‰; and that (ii) large intra-bed δ13Ccarb variations reflect varying contributions of methanotrophic dissolved inorganic carbon (DIC) to the basinal DIC pool. Rare earth element and yttrium (REYSN) patterns confirm a marine origin of the carbonate beds whereas a consistent positive EuSN anomaly suggests a strong high temperature hydrothermal input during accumulation of the Zaonega Formation. Importantly, the presence of a negative CeSN anomaly in the REYSN pattern indicates an oxygenated atmosphere-ocean system shortly after the LJE and indicates that models invoking a fall in oxygen at that time require reassessment.