Authigenesis of biomorphic apatite particles from Benguela Upwelling Zone sediments off Namibia: The role of organic matter in sedimentary apatite nucleation and growth 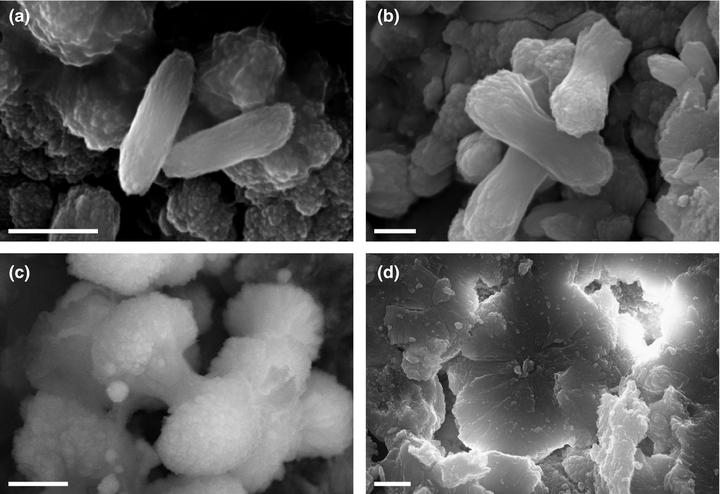 Scanning electron microscope (SEM)‐SE (a,b,d) and SEM‐BSE (c) images of progressing apatite growth forms from broken‐surface pellets (c from core GC4, all others from core 25005). Rod‐shaped and other apatite microstructures form a continuum from (a) spindle‐shaped elongated rods to (b) rods that start to bulge at their distal ends to (c) dumbbells to (d) spherical particles. Scale bars represent 1 μm.

Sedimentary phosphorites comprise a major phosphorus (P) ore, yet their formation remains poorly understood. Extant polyphosphate-metabolizing bacterial communities are known to act as bacterial phosphate-pumps, leading to episodically high dissolved phosphate concentrations in pore waters of organic-rich sediment. These conditions can promote the precipitation of amorphous precursor phases that are quickly converted to apatite—usually in carbonate fluorapatite form [Ca10(PO4,CO3)6F2-3]. To assess the mechanisms underpinning the nucleation and growth of sedimentary apatite, we sampled P-rich sediments from the Namibian shelf, a modern environment where phosphogenesis presently occurs. The P-rich fraction of the topmost centimetres of sediment mainly consists of pellets about 50–400 μm in size, which in turn are comprised of micron-sized apatite particles that are often arranged into radial structures with diameters ranging from 2 to 4 μm, and morphologies that range from rod-shapes to dumbbells to spheres that resemble laboratory-grown fluorapatite–gelatin nanocomposites known from double-diffusion experiments in organic matrices. The nucleation and growth of authigenic apatite on the Namibian shelf is likely analogous to these laboratory-produced precipitates, where organic macromolecules play a central role in apatite nucleation and growth. The high density of apatite nucleation sites within the pellets ($>$109 particles per cm3) suggests precipitation at high pore water phosphate concentrations that have been reported from the Namibian shelf and may be attributed to microbial phosphate pumping. The intimate association of organic material with the apatite could suggest a possible role of biological substrata, such as exopolymeric substances (EPS), in the nucleation of apatite precursors. Importantly, we do not observe any evidence that the apatite particles are actual phosphatized microbes, contradicting some earlier studies. Nevertheless, these results further evidence the potential importance of microbially derived (extracellular) organic matter as a template for phosphatic mineral nucleation in both recent and ancient phosphorites.