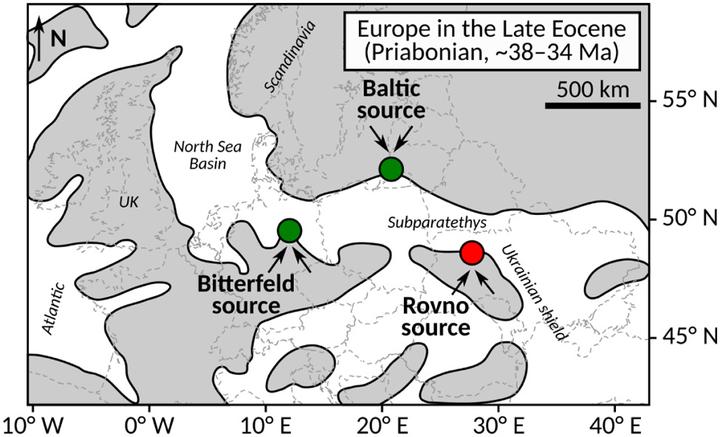 Ambers—fossilized plant resins—are a rich and unique source of paleoecological data due to their ability to preserve soft body fossils. However, interpretations concerning their environmental context are often hampered by uncertainties in the relationship between assemblages of inclusions and geological context, particularly in the case of secondarily redeposited ambers such as those from the Paleogene of Central Europe. Here we use stable carbon and hydrogen isotope analyses, as well as FTIR spectroscopy, from the northwestern Ukrainian Rovno amber deposit, to provide independent constraints on the geographic and temporal origins of Rovno amber. These analyses address the relationship between the Rovno and Baltic amber deposits as well as German Bitterfeld amber—a subject of considerable debate regarding their provenance. Rovno amber has a δ13C signature of −23.3 ± 0.9‰, similar to both Baltic and Bitterfeld ambers. Since there is a secular decreasing δ13C trend among amber deposits since the Early Eocene, a roughly contemporaneous origin of these deposits in the Eocene can be deduced. However, Rovno amber displays a δ2H signature of −258 ± 9‰, 19‰ more positive than Baltic amber, and directly comparable to Bitterfeld amber. This difference relates to precipitation sources and mean annual temperatures of the amber source regions, and suggests a much more southerly origin of Rovno amber relative to Baltic amber. FTIR spectra of each of these ambers are nearly identical and suggest that resin-producing trees were from similar families, despite contrasting source regions. Thus, we provide the first clear geochemical evidence for the distinct origin of Rovno and Baltic amber deposits, with implications for paleoecological studies involving inclusions from these deposits, and for determining the provenance of archaeological amber finds.