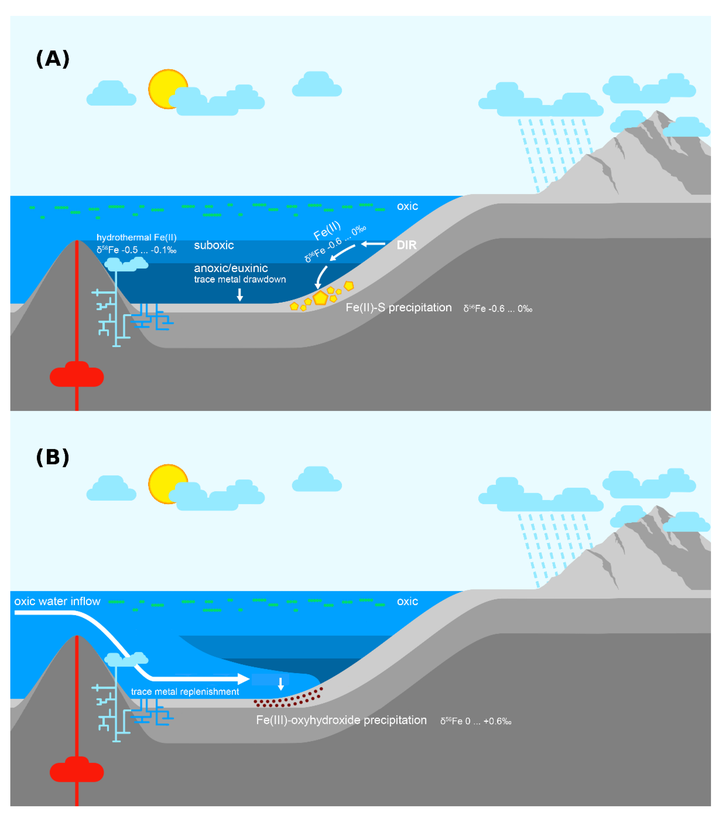 An interpretation of the hydrographic and redox conditions in the Onega Basin during the deposition of the upper Zaonega Formation. (A) Hydrographic restriction rendered the basin redox-stratified. Dissimilatory iron reduction (DIR) converted detrital Fe(III) phases in reducing sediments into Fe(II) with negative δ56Fe values. Dissolved Fe(II) with negative δ56Fe values may also have been contributed by hydrotherms. If overlain by suboxic waters, some of this Fe(II) flux escaped into the water column, was transported into deeper, anoxic waters, and deposited as Fe(II)-sulphides. (B) Periodically, the basin experienced oxic water inflow events, which caused dissolved Fe(II) in the basin to be oxidised, precipitating Fe(III) oxyhydroxides with sometimes positive (up to +0.6‰) δ56Fe values.

The Zaonega Formation in northwest Russia (~ 2.0 billion years old) is amongst the most complete successions that record the middle of the Palaeoproterozoic era. As such, geochemical data from the formation have played a central role in framing the debate over redox dynamics in the aftermath of the Great Oxidation Event (GOE). However, uncertainty over local redox conditions and the degree of hydrographic restriction in the formation has led to contradictory interpretations regarding global oxygen (O2) fugacity. Here, we provide new iron (Fe) isotope data together with major and trace element concentrations to constrain the local physiochemical conditions. The Zaonega Formation sediments show authigenic Fe accumulation (Fe/Al ≫ 1 wt.%/wt.%) and δ56Fe ranging from −0.58‰ to +0.60‰. Many of the data fall on a negative Fe/Al versus δ56Fe trend, diagnostic of a benthic Fe shuttle, which implies that Zaonega Formation rocks formed in a redox-stratified and semi-restricted basin. However, basin restriction did not coincide with diminished trace metal enrichment, likely due to episodes of deep-water exchange with metal-rich oxygenated seawater, as evidenced by simultaneous authigenic Fe(III) precipitation. If so, the Onega Basin maintained a connection that allowed its sediments to record signals of global ocean chemistry despite significant basinal effects.