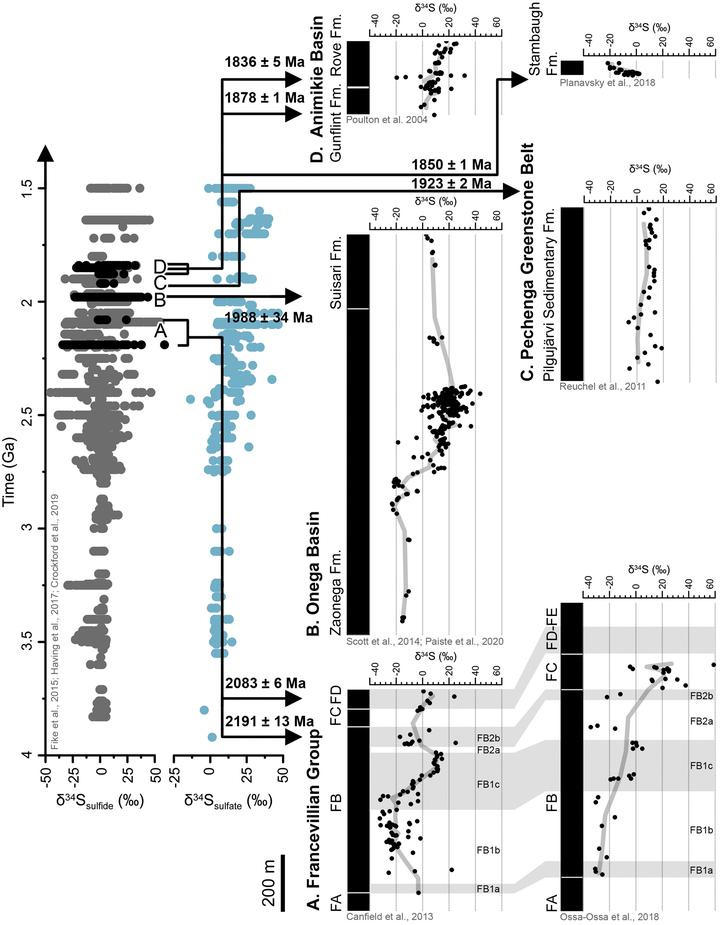 Paleoproterozoic sedimentary successions are important archives of the redox evolution of Earth’s atmosphere and oceans. Efforts to unravel the dynamics of our planet’s early oxygenation from this archive rely on various geochemical proxies, including stable carbon and sulfur isotopes. However, ancient metasedimentary rocks often experienced early- and late-stage (bio)geochemical processes making it difficult to discern primary environmental signals from bulk-rock δ13Corg and δ34S values. Such complexity in carbon and sulfur isotope systematics contributes to uncertainty about the redox structure of Paleoproterozoic oceans. A currently popular idea is that, following the Great Oxidation Event, global changes led to low-oxygen environments and temporally fluctuating ocean redox conditions that lasted until the Neoproterozoic. The volcano-sedimentary rocks of the Onega Basin have figured prominently in this concept, particularly the exceptionally organic-rich rocks of the 1.98 Ga Zaonega Formation. However, a growing body of evidence shows that local depositional processes acted to form the δ13Corg and pyrite δ34S records of the Zaonega Formation, thus calling for careful assessment of the global significance of these isotope records. Placing new and existing organic carbon and sulfur isotope data from the Zaonega Formation into the context of basin history and by comparing those results with key Paleoproterozoic successions of the Francevillian Basin (Gabon), the Pechenga Greenstone Belt (NW Russia) and the Animikie Basin (Canada), we show that the stratigraphic δ13Corg and pyrite δ34S trends can be explained by local perturbations in biogeochemical carbon and sulfur cycling without requiring global drivers. Despite their temporal disparity, we also demonstrate that individual successions share certain geological traits (e.g. magmatic and/or tectonic activity, hydrocarbon generation, basin restriction) suggesting that their pyrite δ34S and δ13Corg trends were governed by common underlying mechanisms (e.g. similar basinal evolution and biogeochemical feedbacks) and are not necessarily unique to certain time intervals. We further show that pyrites in these successions that are most likely to capture ambient seawater sulfate isotopic composition have consistent δ34S values of 15–18‰, which hints at remarkable stability in the marine sulfur cycle over most of the Paleoproterozoic Era.